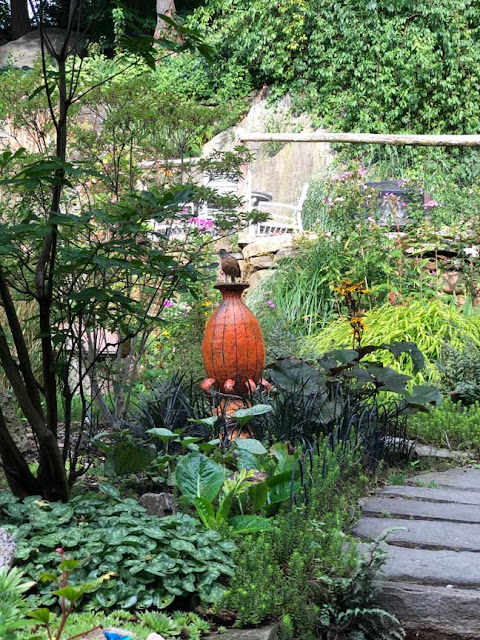 There's so much I want to write about and share here. I've been thinking of starting this blog for more than a year, maybe even two years, but the confidence, energy, and focused vision for it have only just converged and solidified, allowing me to launch it. That's how creative projects usually happen with me. A small grain of an idea floats into consciousness, and there it drifts, in and out of thought, for however long it needs before either dying and clearing room for another to enter, or it taking hold of me, putting down roots and blooming into action. I hope to make writing and posting here a ritual and intend to post most days. I've got lots of plans for learning new outdoor  nature based skills  and executing self sufficiency projects like organic vegetable and herb gardening and making our home and yard more earth and climate friendly. All of this will evolve over time. I will ease into it all, set the scene and introduce myself and our homestead slowly.

About two weeks ago, I took this photo of a robin in our backyard sitting atop a ceramic sculpture I made several years ago. The image captures two of my passions--pottery making and nature observation.

Our yard attracts a lot of local wildlife (plant and animal), especially since this Spring, when I arranged a shallow landing of stones and small tree log in our small pond we built over the last few summers. This has allowed birds, and probably also animals and insects, to more safely bathe in it and drink from it. I'm eager for bull frogs to find our watering hole. I've read that it takes one to a few years after building one for them to appear. Visiting birds bring them from nearby. They eat them elsewhere, then, fingers-crossed, will poop them out here.

We also have two very small bird baths sitting in different locations. A few times recently we've been mesmerized by midday bathing festivals. No less than thirty birds - mostly robins, grackles, catbirds, finches (I think), splashing, hopping, talking, and flying between the pond and the two baths, the atmosphere feels like a public pool on a hot summer day, social, carefree and happy.

It helps that we're located between two large greenspaces, one a New York City park, the other a Westchester County park. Both of them include wooded tracts, ponds, and streams. Over our nearly ten  years here, we've seen a relatively wide range of wildlife--coyotes, red tail foxes, red backed salamanders, among the animals. Milkweed plants and what we think is a regional sunflower have found there way here. We host a zoo of insects, Monarch butterflies among them, also at least three sizes and species of bees, including what I'm pretty certain are honey bees.

One morning a few months ago, R. called me to join him at the front window where he was sitting looking out while drinking his coffee before heading off to work. There was a deer, not in our yard, but just a feet foot beyond, walking north on the street. This was the first time we'd seen a deer so close to our house. It seemed lost. There is a north-west green green space trail that connects the two parks and we hope this young one made it safely back to its family instead of becoming a roadside casualty.

Popular posts from this blog

Read This Before Commenting - Ownership - I CAN REWILD

September 02, 2021
This is a snark-free zone. I'm not expert at anything, nor am I perfect. I'm simply in love with life and our planet, all of nature, including human beings. I'm worried about climate change, species and habitat loss. I intend this blog to be a positive, inspiring online space where I share my daily journey of learning to live a slower, simpler, saner, thriftier, healthier life, more connected to nature and old ways, considering and inching toward a more sustainable, self-reliant and creative existence, living lighter on our mother planet and in my body, mind and soul. Please be kind and thoughtful in your comments. I do want conversation here, and I'm open to learning better ways of doing things, but I won't post any nasty comments.
Post a Comment
Read more

"Do What You Can, With What You Have, Where Your Are" -- Theodore Roosevelt Quote

September 02, 2021
I've loved this Theodore Roosevelt quote since my pottery mentor shared it with our group several years ago. Perfectionist tendencies have always made me vulnerable to procrastination and making excuses for why I can't achieve some dream or goal. It's not that I'm lazy. In fact, I tend toward workaholism. I'm just crafty with deflection, deviation and dilution. I've always got several pokers in the fire. My interests and passions are many. I'm always thinking of the next project, always moving the goalpost further. I've dreamt of living close to the earth and self sufficiently since I was a child. I thought I would homestead on a sunny plot surrounded by wooded acres located about a half hour from a small college town. But, my current reality is starkly (almost laughably) different.  I live with my husband and two beagles just north of New York City in the lower Hudson River Valley in a tiny Cape Cod on a city-sized suburban lot of about an eighth of an
Post a Comment
Read more